Cross-border organised crime: Bulgaria and Norway in the context of the migrant crisis

This Center for the Study of Democracy report reviews trends in transnational organised crime in Norway and Bulgaria, taking stock of the impact of the migrant crisis on two criminal markets – human smuggling and trafficking.

The study presents the first in-depth examination of human smuggling networks and operations in Bulgaria. It also reviews trends in Norway related to both human trafficking and smuggling, two crimes which have rarely been examined together, with the latter being the focus of little overall research.

The refugee crisis presents a serious challenge to European societies. Both transit and desired destination countries experience significant difficulties in dealing with the large influx of people entering their territories. The fight against facilitation of illicit migration and addressing human trafficking are at the top of the nine priorities of the current EU Policy Cycle on Serious and Organised Crime and the European multidisciplinary platform against criminal threats (EMPACT).

The increasing involvement of organised crime and the professionalisation of smuggling services have presented new challenges to effective law enforcement compared to a criminal market dominated by single, disorganised and opportunistic actors. At the same time, the impact that organised human smuggling has had on transnational organised crime more broadly and the convergence between criminal markets and actors have not been sufficiently understood as the mechanisms through which multi-criminal networks take advantage of the new opportunities provided by the illicit migration flow.

Bulgaria and Norway present appropriate case studies for shedding light on the ways organised crime exploits opportunities for increases in profits. Due to the established nature of human trafficking as a criminal threat, Bulgaria as a transit country has managed to build experience, institutional infrastructure and channels of cross-border law enforcement cooperation for countering trafficking in human beings. The effective tackling of human smuggling, however, remains a challenge. In the case of Norway – a major destination country for asylum seekers, irregular migrants, and human trafficking victims, particular attention is paid to human trafficking, which continues to present one of the main fields of operation of organised crime. 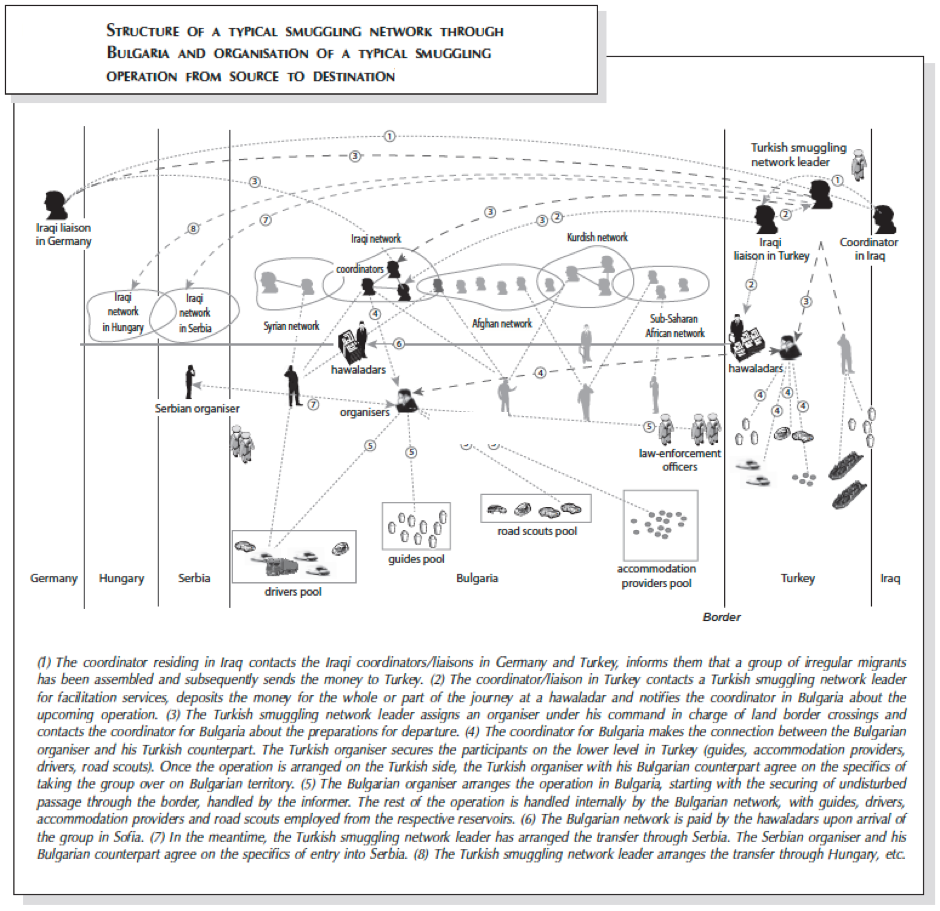 The report discusses the potential links and convergence between smuggling and trafficking in human beings in both countries, compares and contrasts the law enforcement responses towards the two phenomena, and concludes with recommendations for a more effective fight against transnational organised crime. These underline the need for law enforcement to develop crosscutting competences to be able to respond effectively to the evolving complexity and scale of transnational criminal activities across the spectrum of serious and organised crime.

The study has been conducted with financial support under the Norwegian Financial Mechanism, 2009 – 2014.

The Transnational Cybercrime Extortion Landscape and the Pandemic

Inside a ransomware attack: how dark webs of cybercriminals collaborate to pull them …

The unbearable slightness of mutual trust in the area of freedom, security and…

Polarisation, radicalisation and discrimination with focus…