The indisputable recent success of the AARHUS project in Denmark has shown another approach to fighting and preventing the radicalization.

Far from the conventional method of “fighting fire with fire”, the AARHUS Project presents an alternative to put an end or at least reduced it to the minimum, the number of youngsters joining the Jihad cause. A project based on the combination of close and flexible collaborations between different entities and social institutions  involved with the potentials individuals exposed to radicalization, inclusion and scientific foundation , has proven itself to be a major success in Denmark , showing a remarkable decrease in the numbers of Jihad devotees.

Making a brief analysis of the AARHUS de- radicalization model shows that it is mainly based on three characteristics:

There is no ideology or religious involved and it isn`t created to stigmatize minorities’ or groups. It is about criminal conduct an activism outside the law.

In this sense, it is configured as SSP initiative, an interdisciplinary collaboration between schools, authorities and Police.

The aim of the intervention of the early prevention and exit programme of this project is to transform social, political and cultural motivations into legal modes of participation and citizenship. 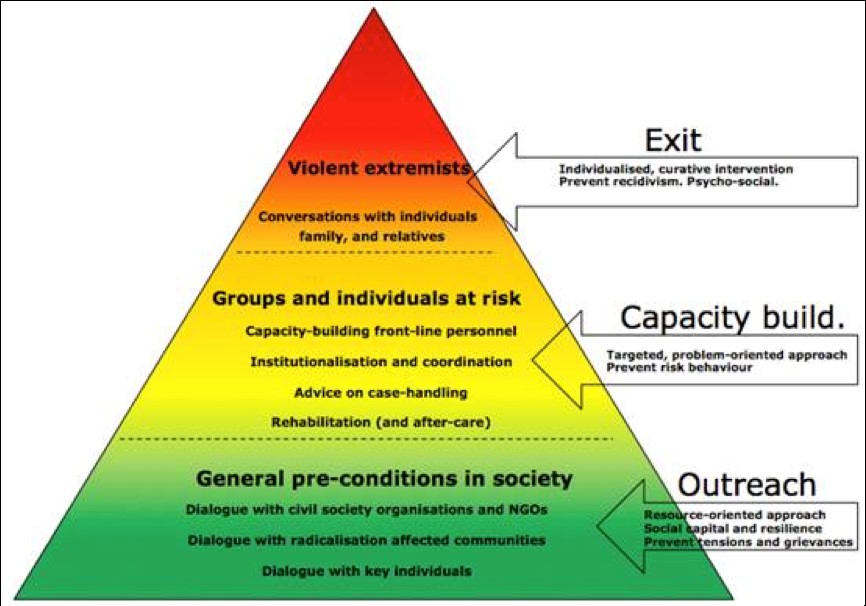 So, where is the success in this project?  Kindness is the answer. However, the main question here is if the AARHUS Project can be applied in other countries. In various occasions, Denmark has been considered “the happiest country in the world “and that is because Denmark’s welfare social policies help to create this sense of joy among Danish citizens. Happy people are trusting. AARHUS project pretends to create trust between authorities and social circles in which radical operate. helping them to find a way back to society.

The success of the AARHUS project speaks by itself but an analysis of its elements is mandatory in order to be applied in other countries that are not considered as happy as they are.

How would the AARHUS Project fit in a Mediterranean City, culturally different from the Danish?

Let us analyse the elements of the project one by one:

This Infohouse is staffed by the Local Police. Taking the example of the city of Valencia, Local Police have been working with their own departments of Domestic Violence (GAMA) and Mediation. Police officers work exclusively in those departments and are constantly in touch with social institutions, social workers, Schools, Court and legal departments.

In addition to this, Community Policing works in the streets dealing with Schools, problematic neighbourhoods,… in order to prevent an detect any case of radicalization going on around them.

In this sense the ties and bonds of Police and institutions is quite strong and it would be a matter of creating a new department focused mainly on de-radicalization.

The recruitment of those mentors was carried out regarding age, gender, ethnic background, formal education and experience, first-hand knowledge of different cultural and social milieus and religious knowledge, in order to approach the wide range of profiles and specific needs of the targeted persons.

Mentoring is an essential element of the AARHUS Project. A mentor:

In this sense, Mentors are important in order to work with the core of his contribution to the programme which is “life psychology that means that whatever your issues, whatever your background or even your diagnosis, you still need certain life skills in order to have a good life.”

For would-be and returning jihadists alike, those skills should equip them to be resilient not to cope with their issues by falling for some Islamic State video online. It is about learning to participate socially; being able to see other people’s perspectives; dealing with value clashes. Ordinary life skills that we all need.”

In our example of the City of Valencia, a parallel could also be drawn here with the figure of Mentors. Same thing that is happening with mediators and Domestic Violence, social services could assign a suitable profile to cope with potential radicals. In those cases, Police officers are assigned to deal with mediations or abused women but in the case of assigning mentors, I don´t see applicable in the figure of a Police Officer. In this situation, there are social resources that could be assigned, for example in the case of homeless, Police officers work hand in hand with social workers.

We can find a similar measure implemented in some organizations, which is the “Tutor Officer”. This could be done but it would need special care in terms of religion an ethnic background of the future mentors, as it has been carried out in the Aarhus Project.

In this situation, there are social resources that could be assigned, for example in the case of homeless, Police officers work hand in hand with social workers.

Again, the implementation of anti-radicalization workshops in Valencian Schools would be easily performed because of the vast experience regarding Police presence at schools.

In parallel with its exit programme, Aarhus also decided early this year to start talking to the Grimhojvej mosque. “We confronted them with their responsibilities,” says Ilum. “Now we hold monthly meetings. We discuss, debate, exchange. There is a real dialogue.”

Furthermore, they receive intensive instruction by means of monthly meetings and ad hoc appointments with their coordinator mentors.

What is the key of the whole Project? It lies upon the theoretical concept of life Psychology, grounded on three presumptions

In conclusion, it can be assured that the implementation of the Aarhus project can be carried out in most countries, although there are opinions that question its apparent success claiming that if a “presumed” radicalized has been successfully de-radicalized it is because  he wasn’t fully a radical. The ultimate goal of a radical is to die for the Jihad and no matter what you do he will never turn back to society. Otherwise, it is not considered a radical.

Even so, the implementation of the Aarhus Project is more than feasible and it does not require many resources. It is just a matter of raising awareness and commitment of the society.

Towards the discovering of similarities and behavioural patterns of suspicious user…

Regional conference on deradicalisation in prisons,…

“ISIS files” will be made available by New York Times and…